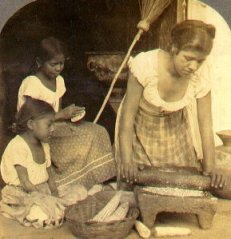 Tortilla is a round bread, a pita without yeast (and hence it doesn't rise) originating in Mexico and Central America.
Today, the tortilla is common all over the world. There are two types of tortillas: corn tortillas and wheat flour (in the celiac era, the third version – gluten free tortilla, although the source of corn flour is gluten free).
The tortilla from corn flour can be prepared from white maize flour (masa) rather than from any corn flour.
The reason for this is that unlike flour (any flour – wheat, buckwheat, millet, taff, sorghum, etc.), which is formed by grinding of grains, the flour tortillas / arepa begins by cooking the corn and then grinding the grains for a dough called masa.
The masa is dried and then grinded, and the flour obtained is the flour of the tortillas.
Excellent! Is it possible to cook the corn at home and make masa corn flour that is hard to find in Israel?
So the thing is … not really …. 🙁
The corn is not cooked in plain water but in water with the addition of shells of oysters or ashes or even lime so that the formed dough will be more sticky and flexible. This process is called nixtamalization, after the name of the Thracian word for corn
As for the option of wheat or "celiac" in our mixture of gluten-free flour or gluten-free originals, we have tremendous abundance.
The use of each of the flour mixture from the "Shay's Naturals" series (multipurpose, thin dough or tuff mix) will give us a wonderful result. The use of net source coals will yield amazing results, and of course a huge variety of tortillas such as tortilla, lentils, peas, Sorghum, buckwheat and more.